The Maine Coon is the official cat of the State of Maine. It is one of the oldest natural breeds in North America; however, its history and origins are vague, with no records or dates of either existing. The first written mention of Maine Coons was in 1861, and during the 1860s, farmers in Maine held the ‘Maine State Champion Coon Cat’ contests. In the early 20th Century, the breed’s popularity went into rapid decline with the introduction of other long-haired cats such as the Persian, and in the 1950s, Maine Coons were declared extinct, although this was generally thought of at the time as an exaggerated and premature declaration. Seemingly so, as the 1970s and 1980s saw a steady rise in the popularity and numbers of the breed, and today it is apparently the third most popular cat breed, according to kitten records kept by the Cat Fanciers’ Association.

The Maine Coon is the largest domesticated breed of cat. It is noticeably a large animal by cat standards, with a rectangular body, a strong bone structure which is necessary to hold its weight, a broad chest and a long, thick and bushy tail, almost like a racoon’s tail. Maine Coons are slow to physically develop; they can take between three to five years whereas a standard cat may reach potential adult size after one year. The adult height can vary between 10 – 16 inches with their length possibly reaching up to 48 inches (including the tail). Weights for males average at about 6 – 9 kg with females coming in at about 4 – 6 kg. The coat of the Main Coon is long or medium length, waterproof, and is double-coated; with longer, uneven guard hairs over a silky, satiny undercoat. They usually grow a thicker coat in the winter, and have a thick ruff of extra hair around the neck and shoulders, giving a lion’s mane look. They are well-suited to living in cold climates, but can cope well in warmer areas too.

Maine Coons can be found in a variety of the usual cat colours, the most common being the Brown Tabby. Colours such as blue, chocolate, lavender, and colours with pointed markings are seen as a result of crossbreeding and are not permitted in the breed standards.

The Maine Coon is known as the ‘Gentle Giant’, due to its size and its genial, amiable, friendly nature. They are intelligent and can be quite easy (for a cat!) to train. They are not generally a ‘lap-cat’ but are loyal to their family and enjoy spending time together, often following their owner around. They can be playful and active, and relaxed around other animals like the family dog. They are known to be quite the talker, making sounds such as trills and chirps rather than the standard meow. They are also very accomplished hunters.

Maine Coons are generally a healthy and hardy breed, with an average lifespan of up to 12 or 13 years. However, around 30% of Maine Coons suffer from the most common heart disease seen in cats; Hypertrophic Cardiomyopathy (HCM), a disease in which the muscle walls of the heart thicken, making it harder for blood to be pumped around the body. The condition can lead to heart failure and other complications such as blocked major blood vessels, causing severe pain. There is a genetic test available to test for the rogue gene thought to be responsible for HCM, although cats who test negative to this gene test can still go on to develop HCM. Cats can be screened for HCM by an ultrasound of the heart, and identified as clear or a carrier. This means it is possible to determine which cats are suitable for breeding and which ones should not be used; highlighting the need to only purchase kittens from reputable, registered breeders.

Maine Coons, like other large, big-boned breeds such as the Persian, especially the males, can also suffer from Hip Dysplasia, an abnormality of the hip joint resulting in lameness and arthritis. It affects approximately 18% of Maine Coons and affected cats inherit the gene from both parents, even when neither may show symptoms themselves. Diagnosis is through manual examinations and x-rays of the joint, with treatment consisting of pain relief and possible surgery, depending on the severity of the individual’s case. As no conclusive DNA test exists, the affected cat should not be bred from, and its parents should not be bred together again either.

Are you a Maine Coon breeder? Please contact us admin@pedigree-pets.com to help expand our knowledge. 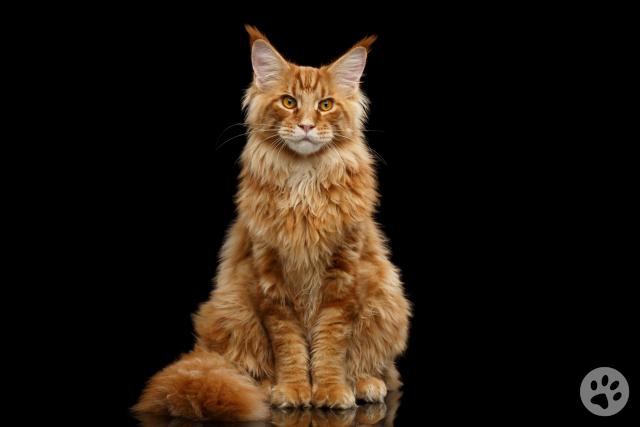