The Bull Terrier shares an ancestry with the Staffordshire Bull Terrier and can be traced back to the now-extinct Bull and Terrier cross, from the early 1800s. Bull and Terrier breeds were used originally as vermin control, and to participate in bloodsports such as bull, badger and bear baiting, and dog-fighting. These dogs were bred for performance, not appearance, but after these sports ceased legally in 1835, James Hinks, known as the founder of the Bull Terrier, wanted a more refined-looking dog, with a nicer head and better legs. He started crossing Bull and Terrier breeds with the English White Terrier (now an extinct breed) to produce a stylish-looking, white dog. These became known as ‘White Cavaliers’ and as James Hinks bred for, became popular among gentry. Gradually, people wanted colour reintroduced, and crossed the Bull Terrier with the Staffordshire Bull Terrier in the 1900s, to produce varieties of coat colour we see today in the Bull Terrier.

This is an easily-recognisable breed, known for its extra-long face and ‘egg-shaped’ head. When viewed from the front, the top of the skull is almost flat. It is still commonly seen in all-white in colour, although there are many other varieties. It is known as a tough dog, and certainly should be respected, although sometimes finds itself more of a ‘statement’ dog and subsequently raised in such a way that it lives up to this reputation.

The Bull Terrier is a dolichocephalic breed (it has a very long face) and possesses an almost flat skull, and a head described as ‘egg-shaped’. They have triangular eyes, and are the only breed of dog to have so. These are deep-set and appear almost black. The ears are naturally upright and pointed. The tail is thick at the base and tapering to a point. They are commonly all-white in colour, but can also be black, fawn, red, brindle or tri-coloured. The coat is short and smooth. This is a stocky, muscular dog, with a broad chest and a strong back and shoulders.

The Bull Terrier is approximately 22 inches height at the wither with an average weight of around 25 – 29 kg for the males, with females weighing in slightly less.

Bull Terriers are overall gentle and affectionate, especially around people they know. They can be playful and exuberant, but also stubborn and obstinate, and do not make an ideal dog for a novice owner. They can occasionally possess aggressive tendencies, and need good socialising from a young age. They can live happily as a family pet, although are not generally recommended for households with other pets or smaller children, as they are big, powerful dogs, and should always be supervised in these situations.

The Bull Terrier is an energetic dog, especially for its stocky stature, so it requires a moderate amount of exercise every day. It should have plenty of walking on-lead opportunities to stretch its legs and exercise its brain, but should not be let off the lead unless in a fenced-in yard or garden, then it will be quite happy to have a run around after a ball!

All puppies should be checked for deafness, which affects over 20% of pure white Bull Terriers, and nearly 2% of the coloured varieties.

Polycystic Kidney Disease (BTPKD) and Bull Terrier Hereditary Nephritis are both breed-specific kidney diseases affecting Bull Terriers, but they differ slightly in genetics and characteristics. They are progressive and irreversible diseases, and often result in total renal failure. Diagnosis is only through DNA testing; however, this allows for affected dogs and carriers to be identified and removed from any gene pools, helping to stop breeding this disease through any future litters.

A Luxating Patella means the dislocation of the patella (kneecap) and can result from injury, but in the case of many Bull Terriers, is congenital (present from birth). Symptoms include limping, pain, a stiff gait, not wanting to jump up or on to something anymore, difficulty getting up after lying down. Diagnosis is by a thorough examination by a vet, manipulating the joint and feeling the depth of the joint to determine the function of the patella. Surgery has a success rate of 90%, and having the surgery done earlier can lessen the chance of the dog developing significant arthritis later in life.

A single person with no other animals in the home, and who has a back yard big enough for running around in, and who enjoys walks around the streets and further afield with a willing companion! Preferably not an owner called ‘Bill Sikes’ who would be a tough master to tolerate (see Charles Dicken’s Classic - Oliver Twist!)

Are you a Bull Terrier breeder? Please contact us admin@pedigree-pets.com to help expand our knowledge. 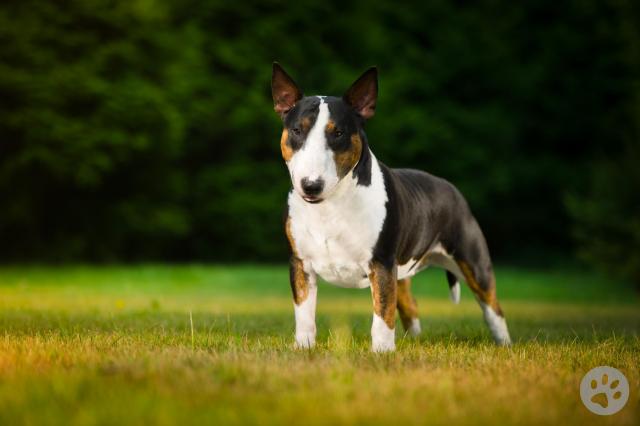