The Miniature Bull Terrier originated from the Bull Terrier, who itself was developed in the mid-1800s by James Hinks, who wanted to breed a more refined, gentleman’s type than the original Bull and Terrier breeds. He started crossing these two breeds with the English White Terrier (now extinct) to produce a stylish-looking white dog. Gradually, people wanted colour re-introduced, so started interbreeding with Staffordshire Bull Terriers, to produce the variety of coat colours available to Bull Terriers today, as well as a variation in size. Interest in the Miniature Bull Terrier has been slow to develop, and it is still an uncommon breed to many. Even though the breed was recognised in England in 1939, the Miniature Bull Terrier was not recognised as a breed in its own right, and subsequently given status in the American Kennel Club until 1991.

The Miniature Bull Terrier may not be well-known, but is easily recognisable as is its cousin, the Bull Terrier, by its extra-long face and ‘egg-shaped’ head. When viewed from the front, the top of the skull is almost flat. It is still commonly seen in all-white in colour, although there are many other varieties.

The Miniature Bull Terrier is a dolichocephalic breed (it has a very long face) and possesses an almost flat skull, and a head described as ‘egg-shaped’. They have triangular eyes, and are the only breed of dog to have so, along with their bigger cousin, the Bull Terrier. These are deep-set and appear almost black. The ears are naturally upright and pointed. The tail is carried horizontally rather than vertically. They are commonly all-white in colour, but can also be white with black, fawn, red, brindle or tri-coloured. The coat is short and smooth. The body is muscular and powerful for its size.

Miniature Bull Terriers can live for about 11 – 14 years.

The Mini Bull is a playful, tough, fun-loving character who finds humour in everything. They can be stubborn and obstinate just like the Bull Terrier, but if something is a game, such as training, they will partake! Being smaller, they are a better playmate for children than the standard Bull Terrier, and are tolerant and gentle towards them. They are friendly towards strangers but still possess watchdog tendencies and, despite their diminutive size, can think themselves as guard dogs!

This is an energetic and lively breed, always wanting fun, and unless exercised daily, can become destructive and naughty and get into trouble. The body and the mind of a Miniature Bull Terrier both need adequate exercise, so regular runs in the garden or park, chasing a ball, are a must for this fun-loving dog.

Lethal Acrodermatitis (LAD) is a genetic degenerative disease found in Miniature Bull Terriers. It can start appearing in puppies around four weeks of age, and as the name suggests, is fatal. In affected puppies, their usual black colour will start to appear diluted, then red-liverish. This is due to a major zinc deficiency and results in a serious skin condition, dysfunction of all systems of the body, and eventually premature death. A DNA test is now available to test breeding dogs, and if individuals are found to be carriers, can be removed from the gene pool to ensure LAD-clear puppies in future litters.

Polycystic Kidney Disease (BTPKD) and Bull Terrier Hereditary Nephritis are both breed-specific kidney diseases affecting Bull Terriers and Miniature Bull terriers, but they differ slightly in genetics and characteristics. They are progressive and irreversible diseases, and often result in total renal failure. Diagnosis is only through DNA testing; however, this allows for affected dogs and carriers to be identified and removed from any gene pools, helping to stop breeding this disease through any future litters.

A Luxating Patella means the dislocation of the patella (kneecap) and can result from injury, but in the case of many Miniature Bull Terriers, is congenital (present from birth). Symptoms include limping, pain, a stiff gait, not wanting to jump up or on to something anymore, difficulty getting up after lying down. Diagnosis is by a thorough examination by a vet, manipulating the joint and feeling the depth of the joint to determine the function of the patella. Surgery has a success rate of 90%, and having the surgery done earlier can lessen the chance of the dog developing significant arthritis later in life.

A fun-loving owner who sees the humour in everything may just match up to the fun-loving tendencies of a Mini Bull!

Are you a Miniature Bull Terrier breeder? Please contact us admin@pedigree-pets.com to help expand our knowledge. 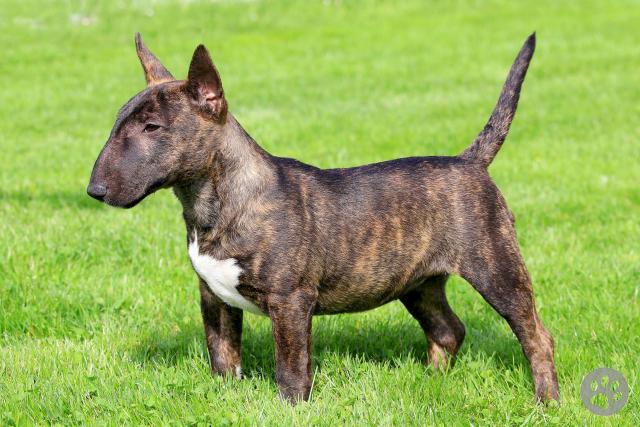