The history of the Cavalier King Charles Spaniel is quite complex. It is descended from a small toy spaniel (now extinct), which features in paintings from as far back as the 16th century, from Europe and England. This original breed was used to warm the laps of gentry in draughty castles or on chilly carriage rides. It is said that their other job was to attract fleas, therefore keeping their master/mistress safe from the flea-transmitted bubonic plague…just how effective this would be is questionable! They became known as the Blenheim Spaniel after the 1st Duke of Marlborough, whose estate was named Blenheim. They were popular under the Tudors and Stuarts, and were given the name King Charles in honour of King Charles 11 who doted on them. The breeding practices and the appearance of the breed changed throughout the 17th and 18th centuries, when it was bred with flat-nosed breeds. These modern King Charles Spaniels then had flatter faces, domed skulls, and undershot jaws. In the early-1900s, attempts were made to return the breed to the original Blenheim Spaniel, as seen in old paintings, and this new breeding was largely successful. By the 1940s these dogs were classified as a separate breed and given the prefix Cavalier, so as to differentiate between their earlier ancestors. Therefore, there are now two slightly different breeds of KC Spaniel; the King Charles Spaniel and the Cavalier King Charles Spaniel.

The Cavalier King Charles Spaniel is recognised by its typical long, droopy, silky Spaniel ears, and typical colouring of red and white or tri-colour. It is a friendly, gentle little dog with a lovely long, silky coat, which needs brushed regularly.

The Cavalier KC Spaniel can be found in a variety of colours; red (or Ruby), red and white (known as Blenheim, featuring the ‘Blenheim spot’ on the head), black and tan (known as King Charles), or tri-colour (known as Prince Charles), with the coat relatively long, soft and silky, often with a slight wave to it. The tail is long with lots of feathering, and there is a lot of feathering on ears, legs and under the belly, which should be left and not clipped. The ears are set high up, and are long and droopy.

This is a small, toy spaniel breed. The Cavalier King Charles Spaniel is, on average, around 12 – 13 inches in height, and weighs around 6 – 9 kg.

These little dogs can live up to around 14 years of age, although average life expectancy is somewhere between 9 – 12 years.

These little dogs are sweet, friendly, gentle, lively, love interacting with people and other animals, and crave human interaction, so are not suited to being left on their own too much. They are affectionate and although naturally out-going and playful, make an ideal ‘lap-dog’ and are quite happy to cuddle up on a comfy knee, making them ideal therapy dogs as well as family pets. They are eager to please and intelligent enough to learn what is asked of them, although may keep their natural tendencies to chase moving things, such as cars, so are not completely ‘street-wise’. Thinking everyone and everything is their friend, they may have a noisy, excitable greeting, but no actual protective qualities!

The Cavalier is a lively, playful little character, but doesn’t require a huge amount of fixed exercise. They are happy with walks on the lead, and runs in parks or gardens; however, they are equally as happy to play the lap-dog often, and rest on a knee or cushion.

As all Cavalier KC Spaniels today descend from only six individual dogs, if there is a genetic fault with the originals, it will easily be passed through the generations. This is called the ‘founder effect’ and may be why there is such a prevalence amongst Cavalier KC Spaniels to suffer from Mitral Valve Disease (MVD); about 20-times more than any other breed. Nearly all Cavaliers will suffer from this serious, progressive heart disease, suffering from heart murmurs which eventually lead to full heart failure. It is the leading cause of death in the breed. Diagnosis is initially made by detection of a heart murmur, leading to further diagnostic tests such as ECGs (electrocardiogram), chest x-rays and blood tests, to determine the severity of the disease. Treatment is usually aimed at the relief of the symptoms, not at a cure. Symptoms start with a heart murmur, leading to breathlessness, coughing, and discomfort, and lead to chronic heart failure and death, if the dog is not euthanised before this time.

Cavalier KC Spaniels are commonly affected by Primary Secretory Otitis Media (PSOM) which is found almost exclusively in the breed. It is also known as glue ear and describes when mucus accumulates in the middle ear, leading to a visible bulge of the eardrum. Symptoms include pain and discomfort, although to what extent the dog shows this, depends on the individual. Visible signs can include a head tilt, unsteadiness when walking, facial nerve damage, twitching of the eyes, itching or inflammation of the ears and around the ear canal, seizures, and varying degrees of deafness. The clinical signs are similar to those shown in another malaise Cavaliers can suffer from, called Syringomyelia, so diagnosis between the two must be made through MRI scans, after initial examination and possibly x-rays of the ear. Treatment in the form of flushing the mucus from the middle ear and in some cases, inserting grommets, is usually effective, although may need repeated again and again. Dogs affected with PSOM should not be used for breeding, but there is no genetic test available to determine which ones may be affected, or indeed, carriers.

Syringomyelia is a condition affecting the brain and spine, caused by the appearance of fluid-filled cavities in the spinal cord of the neck. This condition can affect humans too and is known to be very painful, as is the case for affected dogs. Many show clinical signs including yelping or whining when the head, neck, shoulders or back are touched, or when making sudden movements. The diagnosis is bleak; treatment in the form of pain-relief is often not enough, and the disease is progressive. Again, there is no DNA test available for this condition, so breeders should breed with integrity and not use dogs which have already shown some symptoms, or indeed, have already been diagnosed with this condition.

A quiet family with kind children, or an elderly owner who enjoys a lap companion at home and out and about in the car!

Are you a Cavalier King Charles Spaniel breeder? Please contact us admin@pedigree-pets.com to help expand our knowledge. 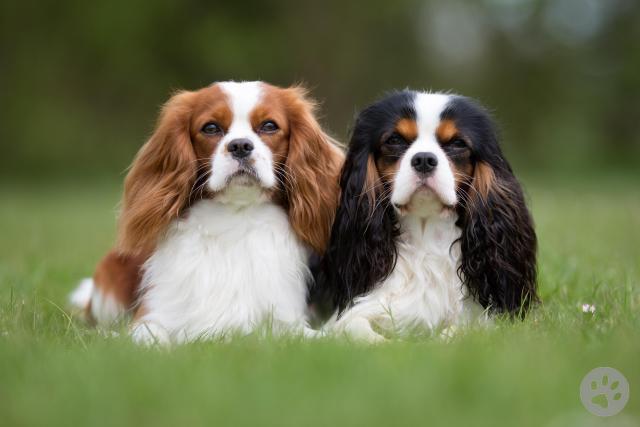