The English Springer Spaniel is a breed of gun dog, closely related to the Cocker Spaniel, and originated in the United Kingdom. In the 1800s, the Duke of Norfolk became interested in the Spaniel breed and developed his own line, known as the Norfolk Spaniel; now the English Springer Spaniel. Initially, Cocker Spaniels and Springer Spaniels would come from the same litters and breed distinctions would only be made on an adult’s mature height. Where the smaller ‘cockers’ hunted for woodcock, the larger of the dogs would be used to flush, or ‘spring’ birds into the air, hence the ‘Springer’ Spaniel was formed. The Springer Spaniel was officially recognised as a breed in the United Kingdom in 1902.

The Springer Spaniel is similar to the Cocker Spaniel, and well-recognised by its energetic, happy nature, slightly soft and silky coat, and long, floppy ears.

The Springer Spaniel has the classic ‘spaniel’ look, with large, brown eyes; long, hanging-down ears; and a soft, silky coat, often slightly wavy. The tail can be left natural and long with some feathering, or docked, especially in working dogs. The Springer Spaniel is the tallest of all the spaniels, with long legs, quite a bit of bone, and large paws.

Although the same breed and registered as such, Springer Spaniels are commonly grouped into ‘field-bred’ Springers or ‘show’ Springers. The field-bred Springer would look out of place in the showring, and vice-versa. The field-bred Springer tends to have a shorter, courser coat than the show Springer, with higher-set ears, and a more wiry, athletic, ‘rougher’ overall look. They are bred more for their sense of smell and hunting ability than their appearance.

The Springer Spaniel coat can come in black or liver (dark brown) with white; blue or liver roan; or tricolours such as black or liver with white and tan markings. Any white coat may be flecked with ticking.

The Springer Spaniel stands at approximately 19 – 22 inches at the wither (top of shoulders) for the males, with the females slightly smaller at around 18 – 21 inches.

Life expectancy for the Springer Spaniel is reported to be around 10 years minimum and 14 or 15 years maximum.

It is often thought the Springer Spaniel is so named due to its energetic nature and love of ‘springing’ everywhere! Whilst this is not historically the case, it’s true the Springer Spaniel has definite high energy levels and can often be seen jumping or bouncing around. Like most spaniels, they have a love of retrieving, and water. They are intelligent and easy to train, and are sociable and can live well in a family with children and other animals. They are friendly but can have a surprisingly deep bark, so can be good as a watch dog or to some extent, a guard dog. Due to their energetic nature, they can be destructive if bored or left alone for long periods of time.

The Springer Spaniel activity needs are high, and they need a large amount of exercise to accommodate these levels. The breed has exceptional stamina and an intelligent brain, so their exercise has to provide outlets for both of these. Hunting or shooting is the ideal choice for them, but a good long walk off the lead every day, and regular obedience training, will keep the Springer Spaniel a happy and content dog.

Similar to the Cocker Spaniel, Springers are particularly predisposed to Mammary Tumours, with malignant tumours having an adverse effect on the animal’s welfare and ultimately leading to ill-health, loss of weight, pain and discomfort, and death. Diagnosis must be made through a biopsy of affected tissue from the lump in question, and x-rays can help assess the development of the tumour. Treatment may include surgery, chemotherapy, radiation, hormonal therapies, and pain-relieving medication. However, each treatment can have their own adverse welfare impacts and side-effects. There is no way to test for the carrier gene nor to eradicate it from the breed through selective breeding.

Springer Spaniels have also been found to be predisposed to Idiopathic Epilepsy (IE), which can manifest itself in localised muscle twitches, or generalised, all-over body convulsions, or seizures or fits. This is due to random, electrical over-active brain activity in the animal. The idiopathic form of epilepsy is when there is no apparent cause for the condition, for example, noticeable injury or disease. Diagnosis is only through a veterinarian ruling out any other underlying causes of the seizures or fits, and there is no method for testing for the condition in individual dogs, or determining if a puppy may develop the disease later in life.

Phosphofructokinase Deficiency (PFK) is a genetic condition which impairs the ability of cells to use carbohydrates for energy, leading to muscle disease, and can also destroy red blood cells, leading to anaemia. There is no effective treatment for the condition; however, through simple DNA testing, the state of each individual dog, whether it is a ‘carrier’ or ‘clear’, can be assessed, and future breeding of that dog determined accordingly, highlighting the importance of purchasing puppies from reputable breeders.

Obviously, an energetic owner, who loves running long distances (including through muddy puddles) with a canine companion, and who owns a gun and needs a willing accomplice to flush targets from the undergrowth!

Are you an English Springer Spaniel breeder? Please contact us admin@pedigree-pets.com to help expand our knowledge. 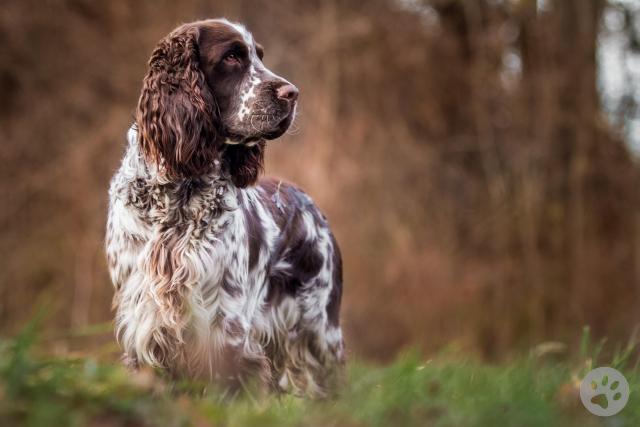