In the United Kingdom, the German Shepherd Dog (also known as GSD) is still called an Alsatian, as at the conclusion of World War 1 the belief was that having the word ‘German’ in the name would harm the breed’s popularity due to the anti-German sentiment at the time. The term Alsatian was only dropped as part of the formal breed name in 2010.

Nowadays, the breed is popular as police dogs, guard dogs, military dogs, dogs for the blind, search and rescue dogs, and as treasured family pets.

The GSD is a widely-recognised breed, due mainly to its distinctive coat and stand-up ears. They are well-known as being a highly-intelligent dog, capable of understanding multiple commands.

GSDs have a double coat of medium length, which requires a fair amount of grooming due to the copious amounts of shedding which occurs all-year round! Long-haired GSDs are also to be seen, although this is not a permissible trait for all official breed standards, depending on country. The predominant colours include black, brown, tan and gold, varying from a black ‘saddle’ back, to a ‘Sable’ (a lighter coat colour) to a pure black. The exact colour of an adult’s coat is not known until the puppy has gone through its first shedding. Pure white GSDs are not recognised under official breed standards.

The ears are naturally upright, tapering to a point. The muzzle long with a black nose. The tail of the GSD is bushy, reaching to at least the hock. The GSD is naturally a sleek, muscular-looking dog, with an intelligent head and a strong neck, often with a ‘ruff’ (denser hair here than the rest of the body).

Bitches are naturally slightly smaller, reaching an adult weight of around 25-35 kgs.

GSDs can reach life expectancy of around 13 years, although sadly, more commonly is a lifespan of 8 – 10 years achieved.

German Shepherds are loyal, courageous, active, and make fantastic companion animals. However, they are naturally protective of their owner and property, and whilst this also makes them a great guard dog, they can be suspicious of strangers and need extensive socialising as puppies and young adults, to ensure they develop into friendly, well-rounded adult dogs. They have a high prey-drive and love to chase, and need firm but fair handling to control this desire. They can live happily in a family environment with all other pets and children, if raised correctly.

Due to their intelligence, they can be trained to undertake a multitude of tasks. However, they can also be a challenge for the inexperienced trainer, and can be a strong, dominant dog in the wrong hands.

GSDs have a high energy level, and need a job to do to keep their bodies, and especially their brains, active! They love to chase and play ball games, and will benefit from plenty of interaction from their owner. If left alone for long periods of time, GSDs can be destructive, even neurotic, and problems will arise for dog and owner. They should always have ample daily exercise, and time off the leash to run and play, preferably with play to stimulate their brains too.

Many of the common ailments seen in the breed today is due to early breeding practices. One common problem is Hip and Elbow Dysplasia, causing pain later in life, and leading to arthritis. Degenerative Spinal Stenosis is also another health issue which affects a high number of GSDs. This causes pain and weakness in the lower spine/tail/hind leg area, and affects the dog’s ability to run, jump, and even rise from a lying position comfortably. MRI or CT scanning is needed to determine the condition, and dogs showing symptoms should not be bred from. Degenerative Myelopathy (CDRM) is a neurological disease which the GSD is predisposed to. A simple saliva test can be done to screen for the mutated gene responsible. This testing will now allow for CDRM to be bred out of the German Shepherd and is another tick in the box for the importance of purchasing a GSD puppy from a reputable, registered breeder.

A dog lover who has had plenty of experience raising strong-willed characters (either children or animals) in a firm but fair manner, and who has plenty of available time to make up games and go for long walks! A friendly owner who has friends and family visiting regularly and who includes their GSD as one of the family.

Are you a German Shepherd breeder? Please contact us admin@pedigree-pets.com to help expand our knowledge. 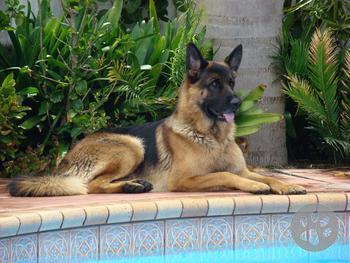