The history of the King Charles Spaniel is quite complex. It is descended from a small toy spaniel (now extinct), which features in paintings from as far back as the 16th century, from Europe and England. This original breed was used to warm the laps of gentry in draughty castles or on chilly carriage rides. It is said that their other job was to attract fleas, therefore keeping their master/mistress safe from the flea-transmitted bubonic plague…just how effective this would be is questionable! They became known as the Blenheim Spaniel after the 1st Duke of Marlborough, whose estate was named Blenheim. They were popular under the Tudors and Stuarts, and were then given the name King Charles Spaniel in honour of King Charles II who doted on them. The urban myth is he even had a decree written which still stands today - that states the King Charles Spaniel be let in to any public place, including the House of Commons! The breeding practices and the appearance of the breed changed throughout the 17th and 18th centuries, when it was bred with flat-nosed breeds. These modern King Charles Spaniels then had flatter faces, domed skulls, and undershot jaws. In the early-1900s, attempts were made to return the breed to the original Blenheim Spaniel, as seen in old paintings, and this new breeding was largely successful. By the 1940s these dogs were classified as a separate breed and given the prefix Cavalier, so as to differentiate between their earlier ancestors. Therefore, there are now two breeds of KC Spaniel; the King Charles Spaniel and the Cavalier King Charles Spaniel.

The King Charles Spaniel is recognised by its typical long, droopy, silky Spaniel ears, and typical colouring of red and white or tri-colour. It is a friendly, gentle little dog with a lovely long, silky coat, which needs brushed regularly. It is a brachycephalic breed, meaning it has a short face, and the ‘squashed-up’ nose look about it.

The KC Spaniel can be found in a variety of colours; red (or Ruby), red and white (known as Blenheim, featuring the ‘Blenheim spot’ on the head), black and tan (known as King Charles), or tri-colour (known as Prince Charles), with the coat relatively long, soft and silky, often with a slight wave to it. The tail is long with lots of feathering, although traditionally docked, and there is a lot of feathering on ears, legs and under the belly, which should be left and not clipped. It has a domed skull and lower-set ears than its cousin, the Cavalier, and a shorter muzzle length, and often has bigger-than-normal eyes. It has a line of black skin to be found around its mouth.

This is a small, toy spaniel breed. The King Charles Spaniel weighs around 4 – 7 kg only and stands at approximately 9 – 11 inches high.

These little dogs can live up to around 16 years of age, although average life expectancy is somewhere between 9 – 12 years, probably due to the medical conditions they are prone to.

These little dogs are sweet, friendly, gentle, lively, love interacting with people and other animals, and crave human interaction, so are not suited to being left on their own too much. They make an ideal ‘lap-dog’ and are quite happy to cuddle up on a comfy knee, making them ideal therapy dogs as well as family pets. They are eager to please and intelligent enough to learn what is asked of them, although may keep their natural tendencies to chase moving things, such as cars, so are not completely ‘street-wise’. Thinking everyone and everything is their friend, they may have a noisy, excitable greeting, but no actual protective qualities!

The KC Spaniel is a lively, playful little character, but doesn’t require a huge amount of fixed exercise. They are happy with walks on the lead, and runs in parks or gardens; however, they are equally as happy to play the lap-dog often, and rest on a knee or cushion.

Heart conditions affecting the KC Spaniel include Mitral Valve Disease (MVD). This is a serious, progressive heart disease, initially causing heart murmurs which eventually lead to full heart failure. It is the leading cause of death in the breed. Diagnosis is first made by detection of a heart murmur, leading to further diagnostic tests such as ECGs (electrocardiogram), chest x-rays and blood tests, to determine the severity of the disease. Treatment is usually aimed at the relief of the symptoms, not at a cure. Symptoms start with a heart murmur, leading to breathlessness, coughing, and discomfort, and lead to chronic heart failure and death, if the dog is not euthanised before this time.

KC Spaniels suffer from various eye conditions, and have an increased risk of Distichia, where extra eyelashes or hairs cause irritation to the eye and can cause tearing, inflammation, squinting, corneal ulcers and scarring. Treatments can include manual removal of the hairs, electrolysis or electrocautery, cryotherapy or surgery.

Being a brachycephalic breed, KC Spaniels can suffer various ailments related to Brachycephalic Airway Obstruction Syndrome (BAOS) which describes the clinical signs seen due to the difficulty in breathing. The main abnormalities seen are narrowed nostrils and a narrowed windpipe, making breathing even harder which can lead to secondary changes which narrow the airways further, such as collapse of the larynx (opening to the windpipe). BAOS will often include snoring, heavy breathing, and respiratory distress with the dog struggling for breath, and can lead to collapse and death. Dogs which suffer are unable to do any exercise at all, are very prone to heatstroke and have constantly disrupted sleep. Clinical diagnosis is made in the form of x-rays and sometimes an endoscopy, with an examination under anaesthetic. This in itself is dangerous for any brachycephalic breed as their breathing difficulties heighten the risk of the anaesthetic.

An elderly owner, wanting a lap-dog for comfort and warmth, maybe with visiting older, responsible grand-children who will willingly throw a ball in the garden for a little excitable friend!

Are you a King Charles Spaniel breeder? Please contact us admin@pedigree-pets.com to help expand our knowledge. 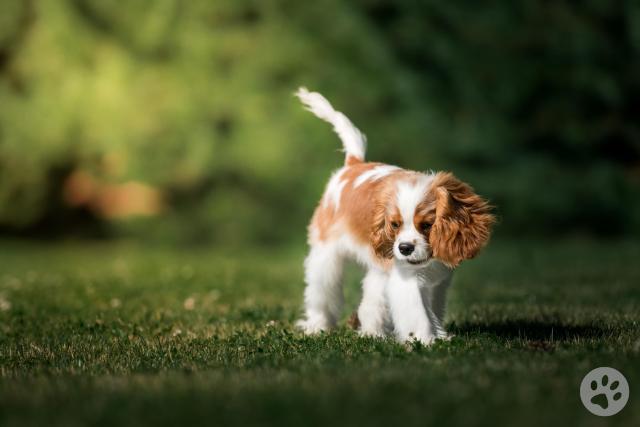