The Staffordshire Bull Terrier shares an ancestry with the Bull Terrier, and can be traced back to the now-extinct Bull and Terrier cross from the early 1800s, which was a breed developed as a fighting dog, popular in the blood sports of bull and bear baiting, badger baiting, and dog fighting.  When these sports were made illegal in 1835, attitudes and the requirement for the breed changed, with the founder of the Bull Terrier, James Hinks, wanting to breed a more-refined, more-socially acceptable gentlemen’s companion dog. Thus, the two different breeds of Bull Terrier were established, with the Staffordshire Bull Terrier so-called as the breed was developed in the county of Staffordshire in the UK, and northern parts of Birmingham. Due to its earlier reputation and fighting dog descendants, the ‘Staffy’ was not recognised by the UK Kennel Club until 1935, and it was not until 1974 that the American Kennel Club accepted the breed.

In the UK, the Staffy is lovingly referred to by many as the ‘Nanny dog’, due to its wonderful and protective nature of children. Despite its fierce look and stance, and its inauspicious origins, the Staffy is a fantastic family dog, gentle but courageous, and popularity the world over has soared for this breed. It is easily recognised by its appearance, namely its powerful muscles and huge jaws, and stocky body with a wide stance.

The Staffordshire Bull Terrier can be found in a variety of colours, ranging from the classic brindle, to red, fawn, black, white or blue or any of these colours with or without white. The coat is short and sleek, requiring little or no grooming. It is a small but weighty dog and gives the impression of being bigger than it really is. The Staffy is a tough-looking dog, projecting power, but also quick and agile on its feet. The huge jaws of the Staffy are well-recognised and respected, and it often looks as though a Staffy is smiling crazily, albeit slightly threateningly, giving the Staffy the unfair reputation of a dangerous dog.

The Staffy is quite a wide dog, and slightly longer than tall. The average height is around 15 – 18 inches and should be proportionate to their weight, which is approximately 13 – 18 kg for males and 11 – 16 kg for females.

The Staffy has a good life expectancy of about 12 years up to 15 years.

The Staffy appeared in a report in the UK in 1996, as one of the TOP 10 breeds MOST suitable for families and children. They are clever, people-orientated and friendly, and have a natural affinity with children especially, as both guardian and playmate. Although possessing a gentle and docile nature, they are also pugnacious and generally won’t back down from a challenge. Training is possible although if it is made into a game, may be more successful! This is a fun-loving dog!

This is a breed where the old adage, “it depends on the owner” definitely rings true, as the very nature of this breed means it can be the most wonderful family pet, or gain an unfair reputation.

The exercise requirements of the Staffordshire Bull Terrier will vary from individual to individual, but in the main, they are very happy to have a garden to play in, or a run at the park, or a game of throwing the ball. They are by nature energetic and lively but do not require miles and miles of running or working like many other breeds.

The Staffy is a healthy, robust dog with a good life expectancy. However, like many breeds, they have a genetic predisposition to Mast Cell Tumours; a cancer of the immune system. These tumours can be malignant or benign, and occur in various forms. Depending on the location and severity, they can cause local itching, discomfort or pain at the site of the tumour, or lead to more severe organ damage, pain, reduced appetite and sometimes, death. Diagnosis is usually made by inserting a needle into the tumour and examining the cells collected under a microscope. If necessary, further tests such as collecting samples of cells from nearby lymph nodes, and x-rays or ultrasounds, may be carried out to determine the potential for growth and spread around the body. The genes responsible for this condition are unknown and there is no way of pinpointing which dogs will become affected, or if some are carriers.

Hereditary eye conditions such as Hereditary Cataracts are also prevalent in the Staffy. This condition causes progressive loss of sight and can lead to complete blindness around two to three years of age. However, a simple DNA test, involving taking a swab from the cheek of a dog, is 99% effective at detecting Hereditary Cataracts in the Staffy. This allows a breeder to screen potential breeding dogs and can therefore verify their puppies are born free of the disease. This again outlines the need to purchase puppies, of any breed, from a reputable, registered breeder, not through backyard breeders who breed dogs indiscriminately.

Are you a fun-loving family, who love going to the park for a kick-about with a ball, or playing in the stream nearby, or have young children who love nothing more than to roll around playing in the garden as often as they can? Then you would be a Staffordshire Bull Terrier’s first choice of owner!

Are you a Staffordshire Bull Terrier breeder? Please contact us admin@pedigree-pets.com to help expand our knowledge. 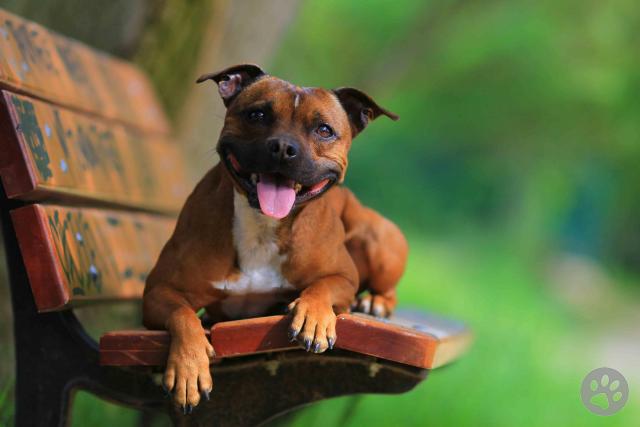